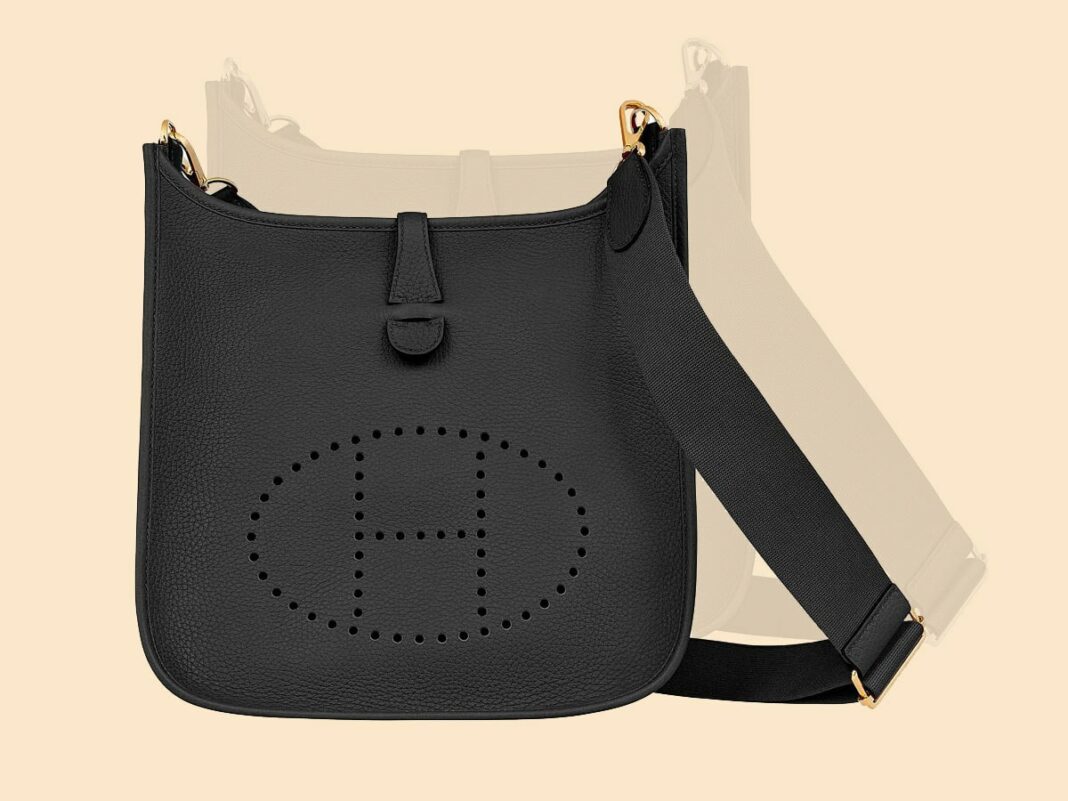 I remember the first time I came in contact with Hermès. I was in Paris, for the first time, and dragged my reluctant mother into the flagship store on rue du Faubourg Saint-Honoré. I haphazardly said to her, ‘Mom, you should buy yourself a bag (she was celebrating her 50th birthday), and while you’re at it, gift me a matching one.’ I clearly had no idea what I was talking about.

When we entered and glanced at a hefty price tag for a measly wallet, my mom shot me back the kind of glare I’ll never quite forget. Yes, many “firsts” happened all at the same time on that trip. It was the first time I learned of Hermès, the first time I entered one of the luxury brand’s boutiques, and unfortunately, the first time I asked my mother for a handbag in which she declined. (Out of my entire collection, she’s only bought me one bag, which was a birthday present. I digress.)

Suffice to say, neither she nor I were familiar with the storied fashion house. I was just shy of 18 years old at the time, with little money to spare on clothes and going out, let alone thousand-dollar bags. My mom could surely afford her fair-share of leather goods, be it at Hermès or someplace else, but with little knowledge of designer goods (she only recently got into purses… blame me), we quickly perused the store and went on our way.

It wasn’t until much later when I learned all that Hermès represented. Now I laugh at my first brush with the brand. Leave it to me to walk inside one of the most high-priced luxury boutiques in the world and have zero clue where I was and what it meant. If only I could have stayed completely uninformed on designers… I would have saved myself a great deal of money.

But that was then and this is now – and as my fascination with luxury leather goods grows, I can only dream of owning my own Hermès one day. Realistically, I think I would purchase a second-hand Birkin or Kelly, if given the opportunity, but either way, the thought of spending upward of $12,000 on a bag makes my stomach churn a little bit.

That’s where the Evelyne III 29 comes in. Before I knew anything about it, I had seen a handful of women carry it. I had no idea how much it cost, but I assumed it would be pricey. When I finally found it on Hermès’ website for less than the amount of a Classic Chanel Flap, I was pleasantly surprised, to say the least. 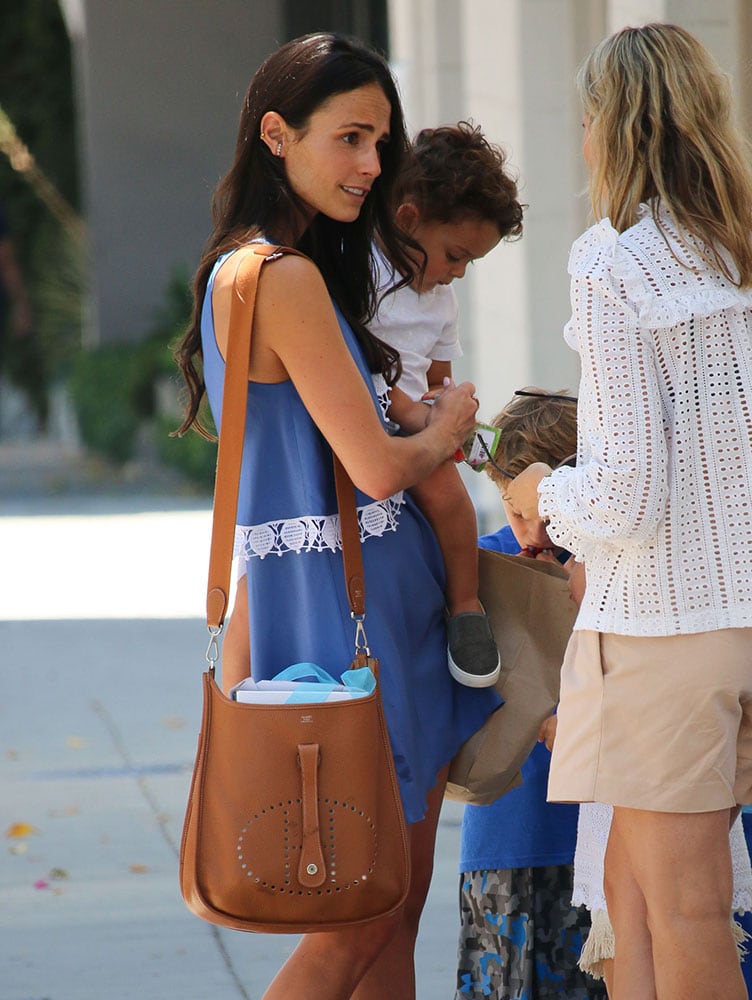 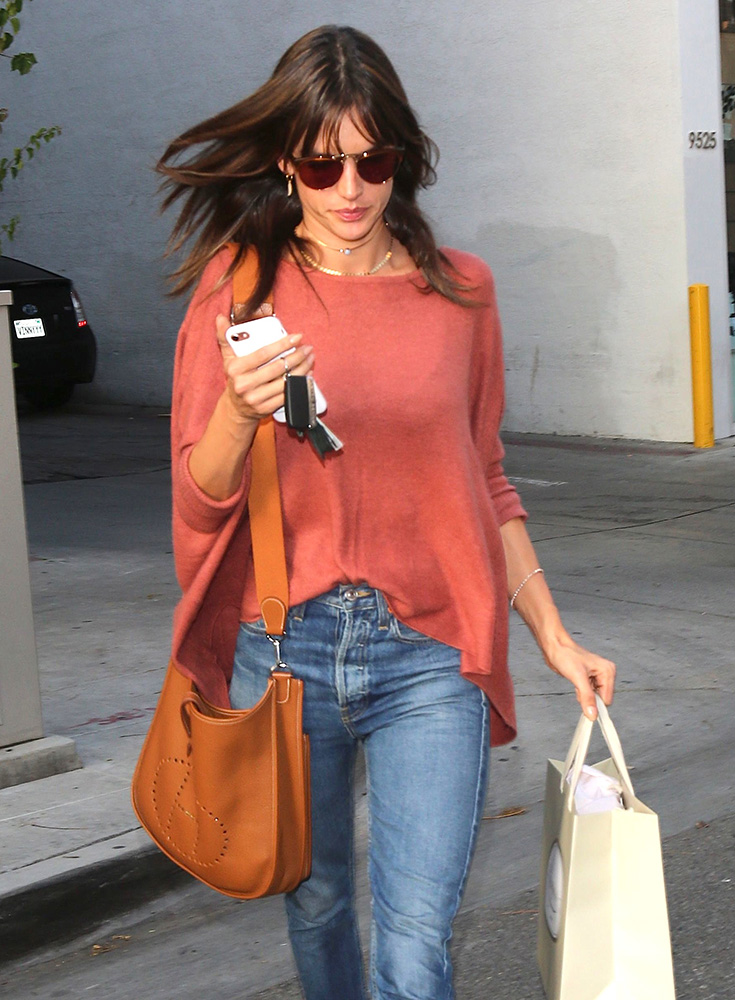 Ever since, I’ve had my eye on this lady. As the description reads online, this bag has been a hit since it launched in 1978 as an accessory for horse riders. It’s sewn without a lining and brightened up with an “H” perforation, with the thought being that the bag would initiate wear against the body in order to allow a horse rider’s equipment to dry. Though it very well may still be used for that today, I’ve mostly seen the Evelyne worn as an everyday crossbody, offering ample room for storage with a reliable and comfortable shoulder strap. Available in a host of colors, including a beige-like étoupe, noir, and a navy bleu nuit, most Evelyne bags are made with Clemence leather with an outside pocket, a larger tab for closure, and palladium plated hardware.

Though there are other sizes available, namely an adorable mini version, I’m focused on this specific model given its functionality as as an everyday bag. Though $3,375 is not exactly cheap, it’s incredibly more affordable when compared to a majority of Hermès’ other handbags and leather goods. My thinking is the Evelyne will provide the same great quality you’d expect to receive with a Hermes Birkin or Kelly, all without the hefty price tag and hassle of nailing one down. (The Evelyne is readily available for online order.)

I’ve checked out a few Evelyne models in store, and after some time with them, it’s evident the quality is everything you’d expect from Hermès. Not only that, based on the many celebrities we’ve seen touting this specific style, it’s clear the bag wears well. Judging by the photos, many of them appear to be in excellent condition.

As with any bag, I do have a few reservations. I don’t love that the interior pocket is essentially a bottomless pit. I fear my valuables will get mixed together, making the bag difficult to navigate at times. I also wonder how sturdy the closure tab is. That’s the reality of bag-buying, though – you win some, you lose some. But I’m willing to bet the pros outweigh the cons on this one, especially considering the cost and quality factors. Maybe a Hermès bag isn’t so out of reach after all.

The Evelyne III 29 is an excellent choice, whether as an “intro-to-Hermès” or just an everyday addition to an already-established Hermès collection. Over the years I have seen this bag worn on women and men of every age and style. It is a simple, timeless and very functional design. It is easy to care for and use, and is a great go-to style for students, young moms, travelers, and people who either want or need to be hands-free with their bags.

With all that said, Clarissa’s concerns must be acknowledged. Yes, it can definitely be a “bottomless pit” and is not for those who like to keep their bag interiors organized, but that is a trade-off people make when one values capacity over organization. This is also a problem that can be managed, whether by finding a workable bag organizer, or by keeping those things that tend to disappear or fall to the bottom in different pouches or holders. The other concern – and this is the one that has actually kept me from purchasing this size Evelyne – is that not everybody can wear a crossbody bag, and there is really no other easy way to wear this. I have a smaller cross-body bag and my personal time limit is 15 minutes before the pain in the middle of my back starts. However, this is not an issue for a great many stylish people, and if you are one of them, then you should definitely consider this style.

Overall, however, I cannot recommend this bag highly enough, to all who are interested in it. It really does suit just about everyone, and as with all Hermès bags, it bears the craftsmanship and quality that Hermès is known and well-regarded for. It is for those reasons that the Evelyne III 29 is definitely worth the investment.

About Basketball shoes & what to consider when buying one

Why Women should Purchase Custom Made Jewelry?

A Look at the Incredibly Covetable Dior Ultra-Matte Bags

ABOUT US
VsBag is the Internet’s largest, most popular sources of news and information on designer handbags and accessories. VsBag was started in early 2010, now it become an online world where blogging was just beginning to gain traction, everyone if you have a good original article, you can post here.
Contact us: [email protected]
FOLLOW US
© Copyright 2019 VsBag.Com All Rights Reserved.
MORE STORIES
Top Retailers

vsbag - January 13, 2023
0
What makes Bvlgari bags exceptional? Their impeccable Italian craftsmanship, contemporary design, and lavish aesthetic make them stand out. Founded in 1884 by a talented Greek...