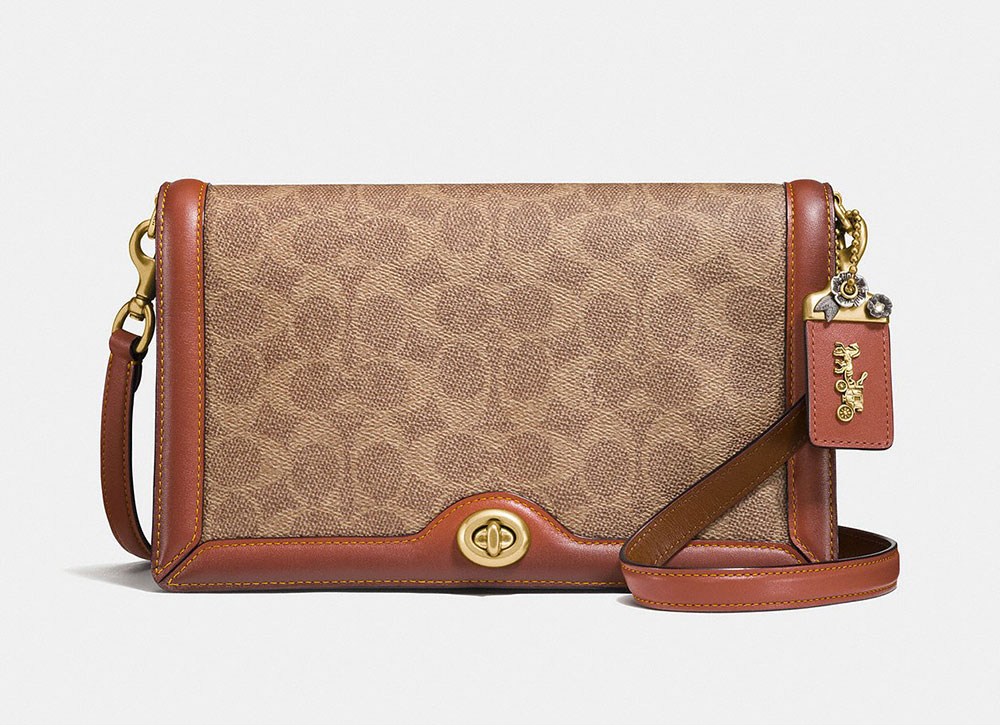 Over the weekend, a friend asked if I ever thought a particular aesthetic would ever come back in style, and I gave him the schpiel I always give when that topic comes up: as soon as a look is as unpopular as you think it can ever get, it has already started its journey back to trendiness. Not every tired trend completes the full journey, but enough of them do that it’s a recognizable process for even casual observers: flare-leg jeans, peasant tops, pussy bows, saddle bags and, lately, logo-print accessories. Long thought to be dead in the water of the mid-aughts, logo bags have made a strong comeback, bolstered by the resurgent popularity of brands like Louis Vuitton and Gucci. Now, another brand wants to get its once-ubiquitous logo in the comeback game: Coach. But will it work? We broached the question to you back in January, and you were skeptical; now, more of Coach’s new logo bags have arrived.

The past several years have been marked by a circuitous rebuilding effort at the stalwart American accessories legend. After the departure of longtime creative director Reed Krakoff in 2013, Coach brought in Stuart Vevers of Loewe to reinvigorate the brand’s look, as well as its fashion bonafides. Vevers was a great choice: he was in the process of successfully overhauling one leather goods brand already, he’s taken seriously by the industry in exactly the way Coach wants to be, and his touch has immeasurably improved Coach’s approach to ready-to-wear and shoes. Bags are trickier, though, especially for brands with deeply entrenched—and not always flattering—public images. Bags, after all, are the most public image-laden of fashion purchases, and especially logo bags. With them, there is no subtext, only actual text.

Which brings us to why a logo restart might be a little harder for Coach than it has been for the premier designer brands who have given it a recent attempt and succeeded. Louis Vuitton and Gucci logos once fell out of fashion because they were seen as too nakedly aspirational and obvious; for people attempting to signal their subtle understanding of (and therefore alignment with) the visual signaling of the upper classes, logos were too closely tied with the naked ambition of class mobility. Now, exactly the sort of signaling that was once tacky feels sort of chic, in a self-conscious, irony-soaked way. Certain kinds of logo bags, and therefore the people who carry them, are in on the joke, which has helped the look become cool again.

This particular path back to prominence is harder for a contemporary brand like Coach, though, because its logos were signaling something altogether different the last time they were cool. The brand’s prices were far more accessible than its logo contemporaries, and its bags were features of malls the country over, so they were markers of a different sort of status: solidly middle class, sensible, appropriate for moms and middle schoolers alike. A splurge, but not a totally ridiculous one. The class markers signified by the Coach print were different, so the print can’t mean quite the same thing as the other revived logos now, in the postmodern aesthetic universe of 2018.

That doesn’t mean a comeback is impossible, though. If fashion in the past few years has taught us anything, it’s that practically any look can be revived, if done with the right attitude and implementation. I could imagine a universe in which that was the case with Coach, but the design and its tone would have to be just right.

So now, you tell us: what do you think of Coach’s logo revitalization? Check out the new logo bags below and tell us if you think they’ll take off.

Which is the best place to buy fashion jewelry online?

Which is the best place to buy fashion jewelry online?

ABOUT US
VsBag is the Internet’s largest, most popular sources of news and information on designer handbags and accessories. VsBag was started in early 2010, now it become an online world where blogging was just beginning to gain traction, everyone if you have a good original article, you can post here.
Contact us: [email protected]
FOLLOW US
© Copyright 2019 VsBag.Com All Rights Reserved.
MORE STORIES
Bag Reviews

vsbag - November 23, 2021
0
There are a wide range of lighting solutions that are available in the market which provide excellent illumination and efficient results. The street lights...